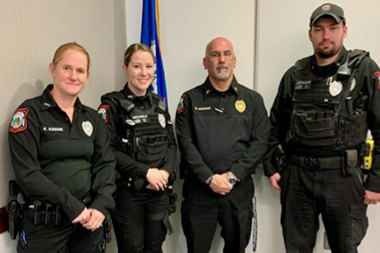 Montville Police save child from fire

"A good day is saving a life while carrying out your duty to protect and to serve."

On the evening of Nov. 19 the dedicated police officers of Montville, Connecticut Lt. David Radford, Ofc. Lindsey Michaels and Ofc. Kenneth Stuart – members of AFSCME Local 2504  – rescued a 10-year-old boy who was trapped inside an apartment fire.

Police received a call about a structure fire at an apartment building, where a child was trapped inside. Officers sprinted out, and upon arrival at the scene of the blaze, all they could see was heavy black smoke, and a terrified child peeking out of a second floor window.

The officers charged into the building, kicking down the door and getting knocked to the ground by the smoke. One of them then drove his squad car over the curb and directly underneath the second-story window where the boy was located. Standing on the roof of the car, the officers were able to grab the child’s hands and started to pull him out of the window.

The child was transported to the hospital, where he was treated for smoke inhalation.

Thank you, Montville officers, for your fearless dedication to your community!